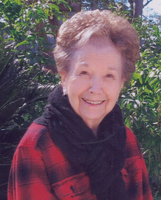 Funeral services for Joan Maurine Noack Fisher, 92, of Cleveland, TX and formerly of Lovington, NM, will be held on Tuesday, October 1, 2019 at 2:00 pm at 3rd & Central Church of Christ with David Stewart officiating. Arrangements are under the direction of Kirby-Smith-Rogers Funeral Home. Joan was born in Noodledome, TX on March 2, 1927 to Selmer and Beulah Adams and passed away on September 26, 2019 in Cleveland, TX. She was married to ML Noack in Andrews, TX on May 14, 1949 and they had three children, Bill, Sabra and Dietra. Joan and ML owned Noack shamrock and then in 1973 they opened Noack Western Wear. He passed away in 1983 after they shared thirty four years together. In 1987, Joan married Paul Ray Fisher on April 27, 1987 and to the family they added his two children, Lee and Paula. She and Paul Ray were married for twenty five years before his death. Joan operated the Western Wear Store until she retired. She loved quilting, painting in oils and working in her garden. Along with feeding the birds, baking sweet treats and crafting Christmas ornaments for her grandkids. Her house was always a home away from home to all her extra kids and she loved the surprise visits and calls more than anything. She was Queen of the Open Range Cowboys in 2013 and loved going to the Senior Citizens for lunch and to play games. Joan was a member of 3rd & Central Church of Christ since 1959 and she loved her church family. Preceding her in death were her parents: Selmer and Beulah; two husbands: ML and Paul Ray; two sisters: Joyce and Helen Russell; one granddaughter: Davena Walkup Berghauser and one great-grandson: Aaydyn Noack. Surviving her are her children: Bill and wife Barbara Noack of Lovington, NM; Sabra and husband Ross Walkup of Durant, OK; Dietra and husband Albert Weaver of Cleveland, TX; Stepchildren: Lee Fisher of Platter, OK and Paula Prior of Lubbock, TX ; one sister: Jean Cox; ten grandchildren, twenty two great grandkids and five great-great- grandkids and a host of nieces and nephews. In lieu of flowers memorials may be made to; New Mexico Christian Children's Home, 1356 NM 236, Portales, NM 88130-9411 in memory of Joan.