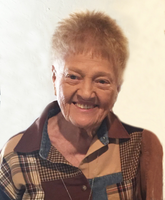 Memorial services for Juanita Ruth "Pudge" Blackard, 91 of Lovington, NM will be held on Monday, January the 25th at 2:00 at the First United Methodist Church. Pastor Matt Bridges and Pastor Josh Crow will be officiating. Arrangements are under the direction of Kirby Ratliff Funeral Home. Pudge was born on August 24, 1929 to Harlow Clarence and Anna Adkins Acord in Boynton, Oklahoma and passed away at Lovington Health Care in Lovington on January 17, 2021. Pudge married Oral George "Slug" Blackard on November 8, 1947 in Clarksville, Arkansas. They shared 65 years of marriage until his passing in 2013. She attended school in Clarksville Arkansas and started College at the College of the Ozarks in Clarksville. Her part-time jobs included pumping gas at her Dad's Esso station and serving sodas and shakes at the Clarksville, Palace Drug Store. She and Slug lived in Clarksville and then in Lake Arthur, NM before moving to Lovington in 1956. Pudge worked at Lea County Electric for 25 years before she retired. It was a love of her life to be the receptionist at the Electric Company. It was there she could share snacks, smiles and warm greetings, daily. Pudge and Slug were honored as-Citizens of the year together in 1989. Pudge was a lifetime member of the Methodist Church in Lovington. She was a dedicated member of the church choir and was passionate in her serving as the Chairman of the Cornerstone food ministry. There was a time that she volunteered and dressed as Dusty Roadrunner, going to the elementary schools to promote community beautification. March of Dimes, hearts and cancer groups were also her volunteer groups of choice. She enjoyed being a member of Beta Sigma Phi Sorority and held many offices with that group. Her name was often equated with the "energizer bunny." Her energy level was one that couldn't be matched. And at Christmas, her gifting included running her garlic bread sticks (called Pudge sticks by John Graham of the Lovington Daily Leader) to so many in the town that she loved so much. She also had a card ministry which she did, until her hands wouldn't work anymore. She was preceded in death by her parents, her husband and her son-in-law Jim Crow. She is survived by her daughter, Connie Crow of Lovington; two grandsons, Josh and wife, Ashley Crow of Quanah, Texas and Casey and wife, Jodi Crow of Panhandle, Texas. Also by five great-grandchildren: Ellis Crow, Kimber Crow, Edge Crow, Eppie Crow and Judd Crow. Also by one sister, Anna Evelyn Blevins of Lubbock, Texas and several nieces and a host of friends. In lieu of flowers, memorial donations may be made to the First United Methodist Church, PO Box 745, Lovington, NM 88260.