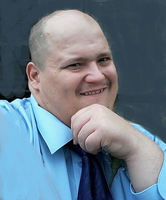 Memorial services for Michael Wayne Robertson, 31, of Eunice, NM will be held on Monday, April 22, 2019 at 4:00 pm at First Assembly of God Church in Eunice, NM with Steven Harper and Dwayne Thornhill officiating. Arrangements are under the direction of Kirby-Smith-Rogers Funeral Home. Michael was born on December 16, 1987 in Seminole, Texas to John Dwain and Deborah Jane (Sumruld) Robertson and passed away on April 14, 2019 in Eunice, NM. He grew up and attended school in Eunice and was involved in drama class and played football. Michael liked Super Heroes and comic books and was a master at video games. He enjoyed drawing and was very adept and talented. He was a comedian and was a little stubborn and a little onery and liked making people laugh. He enjoyed rap music, rock & roll, reggae and some country music; he also liked movies and truly loved to cook. He had a good heart and was a very forgiving man. He loved his friends and would do anything for them. Preceding him in death was one brother: David Isaac Robertson and his maternal grandparents: George and Earlene Sumruld and paternal grandparents: Jasper and Doris Robertson. Surviving him are his parents and one brother: Johnny and Jamie Robertson of Eunice, NM and one niece: Hollie Robertson; also other family members and a host of friends.