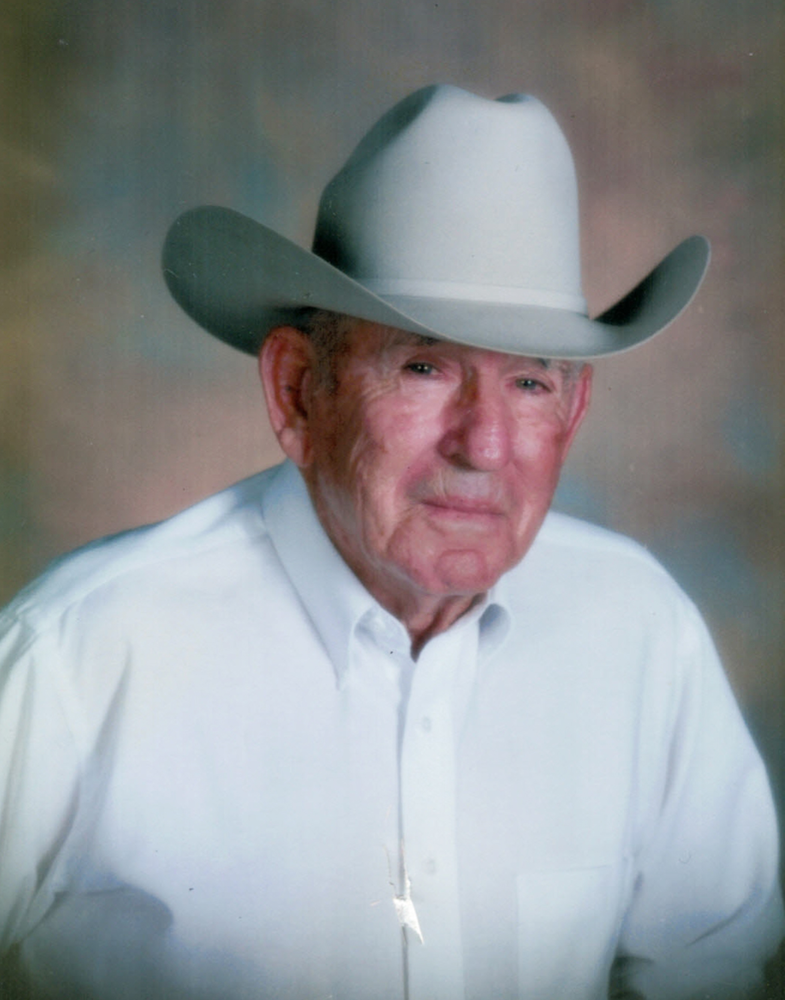 Please share a memory of Giles to include in a keepsake book for family and friends.
View Tribute Book
Graveside services for Giles Milton Lee, 98, of Lovington, NM will be held on Wednesday, April 28, 2021 at 2:00 pm at Lovington Cemetery with Pastor Kyle Brown officiating. Arrangements are under the direction of Kirby-Ratliff Funeral Home. Visitation will be held at the funeral home on Tuesday, April 27th from 5:00 – 7:00 pm. Giles was born on December 10, 1922 in Midland, Texas to Richard David "Dick" Lee and Sarah Viola (Forrester) Lee. His siblings were Brookie Lee Anderson and Roy Raymond Lee and R. D. Lee, Jr, with Giles being the youngest in the family. He spent his earliest childhood in Midland but the family soon relocated to Lea County, NM when Giles' father entered into a partnership with Scharbauer Cattle Company of Midland. Dick Lee was part owner and manager of the ranch and moved his family to the swamp Angel Ranch headquarters, southwest of Lovington in September, 1925. When Giles reached school age, the family decided to build a home in Lovington so he could attend school there. They built the first brick home in Lovington on the corner of Fourth and Adams streets. Giles graduated from Lovington High School in 1941 and entered New Mexico A & M in the fall of 1941. Following a year of college, he joined the Army and served three and a half years in the Army Air Corps, going to the Pacific for mop-up operations. He was a Staff Sergeant and Crew Chief on B-17 aircraft. After his discharge from the Army in 1946, he returned to college at New Mexico A & M in Las Cruces. While he was still in the Army and on leave during Christmas, he met the new music teacher's daughter, Joan Anderson. "Joie" graduated from the University of New Mexico and was teaching in Carrizozo. Giles soon remedied the distance problem by marrying Joie on July 7, 1947. While at NM A & M, Giles was one of the founders of the college rodeo team. He had been active in rodeoing since he was a young man, riding broncs and bulls as well as roping. He was active in the National Intercollegiate Rodeo Association Alumni and served on their Board of Directors. Giles and Joie returned to Lovington in 1948 following college and along with their baby daughter, Elizabeth Forrester (Libby), and moved to Swamp Angel Ranch in September. Their daughter, Rebecca Brooks (Becky) was born in 1953 and Mary Ann was born in 1954. Giles was a member of the New Mexico Cattle Grower's Association, having served twice as Vice-President. He also served on numerous committees within the NMCGA and organized the Hereford Tour for this area of New Mexico. Giles held a long-time interest in quality cattle on his ranch and diversified into crossbreeding his Hereford cattle in the early 1980's. Later, he began raising straight bred Red Angus Cattle. Because of the great interest in team roping in this area, Giles, an active roper himself, organized the Lea County Team Roping Championship in 1959 and held the event in his arena annually for over twenty years. An extension of this event was the Wednesday night team roping that Giles, Joie and the girls put on through the spring and summer months at the ranch. Many youngsters began their roping career at Giles Wednesday night team roping. Giles holds a gold card in the Professional Rodeo Cowboys Association, having joined in 1947. He is one of the founders of the Senior Steer Roper's Association which began in 1984 and he served ten years on their Board of Directors. He was active as an adult director in the Lea County Junior Rodeo Association. The Lovington Lions Club honored Giles as Conservation Rancher of the year and he was chairman of the Rancher's Fund that aided in the beginning of the University of the Southwest and established a historic family room for the Lee Family in Lea County Museum in Lovington. Giles was also a member of Our Savior Lutheran Church. Having called Lea County his home for over ninety years, Giles was still involved in ranching at Swamp Angel, where he came as a young boy. His legacy is an ongoing program that resulted in fine crossbred and Red Angus cattle known throughout the area. He was most proud of his family. He and Joie spent seventy years of married life together, raising three daughters and welcomed seven grandchildren and three great-grandchildren into their close-knit family. Preceding him in death were his parents; his wife Joie; two grandsons: Christopher Shaun Berry and CPT Todd Tyler Christmas and one great-grandson: Luke Shaun Hilton; two brothers: Roy Raymond and R. D. Jr. and one sister: Brookie Lee Anderson. Surviving him are three daughters: Libby (Danny) Berry of Eunice, NM; Becky (Brad) Christmas of Wagon Mound, NM; and Mary Ann (Bub) Waldrop of San Angelo, TX; Five grandchildren: Jessica (Jeff) Hilton, Matt (Rachel) Christmas, Will Christmas, Ashley Ham and fianceé Kyle Coble and Brooke Ham. Also three great-grandchildren: Hannah Hilton, Dillon Hilton and Todd P. Christmas. Memorials for Giles may be sent to the Haley Memorial Library, 1805 West Indiana, Midland, TX. 70701; Lea County Cowboy Hall of Fame, 1 Thunderbird Circle, Hobbs, NM 88240 or Lea County Museum, 103 South Love, Lovington, NM 88260. Condolences may be sent to www.kirbysmithrogers.com.
To plant a beautiful memorial tree in memory of Giles Lee, please visit our Tree Store
Tuesday
27
April

Share Your Memory of
Giles
Upload Your Memory View All Memories
Be the first to upload a memory!
Share A Memory
Plant a Tree