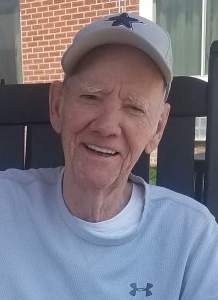 Please share a memory of Victor to include in a keepsake book for family and friends.
View Tribute Book
Victor was born on September 30, 1937 in Buck Township, Illinois to Victor Arlo and Virginia Ann (Spencer) Vice and passed away on December 4, 2022. Victor graduated from Chrisman High School. He then went to the air force in 1954 at Lackland Air Force Base for Basic Training. Later he became airman 2nd class fireman based in Roswell, NM. Victor served in the military for 2 years. While in Roswell he met his wife Eda Beth at a drive in theater, where she was a waitress. They dated for six or seven months before getting married on October 9, 1957. He worked for Roswell Fire Department for 10 years then he had a trucking business for ten years and then went to work for Coastal Oil & Gas for twenty years. Victor enjoyed golfing, fishing, and hunting. He loved the Dallas Cowboys. His favorite pastime was visiting with friends, drinking coffee and also cooking breakfast for anybody that was there. Victor was a member of First Baptist Church in Tatum. He was preceded in death by his parents: Victor and Virginia Vice; his wife: Eda Beth Vice; one son: Jimmy Don Vice; one great-granddaughter: Suttyn Massey; nine brothers and sisters. He is survived by two daughters: Vicki and husband Rick Waygood of Sundown, TX., and Carolyn and husband Randy Robertson of Lovington; two brothers: Max Vice and Dave Vice both of Paris, IL; one sister: Kathleen of Paris, IL; six grandchildren and ten great-grandchildren. In lieu of flowers donations in memory of Victor Vice may be sent to Library of Legacies, LLC 1303 W. Marshal Howard Blvd. Littlefield, Texas79339.
To plant a beautiful memorial tree in memory of Victor Vice, please visit our Tree Store
Thursday
8
December

Share Your Memory of
Victor
Upload Your Memory View All Memories
Be the first to upload a memory!
Share A Memory
Plant a Tree